Bleeding during pregnancy is more common than you may suspect. As many as one in three women will have some sort of bleeding during their first trimester of pregnancy. This can range from a few brown spots to bright red blood loss and for some, passing large clots.

Bleeding can occur at any stage of pregnancy, though it is most common in the first trimester. It is important for women to remember that it is not necessarily a sign of problems. However, bleeding in the second and third trimesters can indicate a pregnancy complication. Any bleeding, at any stage, still needs to be investigated.

There are a number of reasons why vaginal bleeding during pregnancy occurs:

Bleeding during the first trimester

Bleeding during the first 3 months of pregnancy can be a sign of miscarriage. Around 15% of pregnancies result in miscarriage before the 12th week of gestation. Although the statistics are high, for the individual couple who have experienced a pregnancy loss, the effects can be significant.

Not all bleeding is a sign of inevitable miscarriage though. Around half of the women that experience bleeding do not miscarry. Sometimes within the first 6-12 days of pregnancy there is what is known as an implantation bleed. This occurs when the thick, bloody lining of the uterus is disturbed by the embryo nestling its way into the uterus. An implantation bleed generally only lasts for a day or two before it settles down.

In cases of threatened miscarriage and bleeding, women sometimes progress to the stage where miscarriage becomes inevitable. This means that nothing can be done to retain the pregnancy or support it continuing. It can be fairly safely assumed that the majority of miscarriages that occur are as a result of major problems with the development of the embryo. Miscarriage is often seen as “nature’s way” of ensuring that more healthy embryos survive and are able to progress into the later stages of development.

By definition, a threatened miscarriage is when the embryo is still inside the womb. A complete miscarriage is when the womb is empty and the embryo has been passed. Many times, it is necessary for women to have a D & C – a dilatation and curettage of their womb – to clear out the products of conception. Retaining these in the womb can lead to infection and on-going bleeding.

What is important to remember if you are bleeding during pregnancy

This occurs when the embryo implants outside of the womb. The fallopian tube is a common site and because the tubes are not designed to expand like the womb is, the tube can rupture as the embryo grows. An ectopic pregnancy occurs once in about every 60 pregnancies. It is more common in women who have had surgery to their fallopian tubes, had an ectopic pregnancy previously, or have a history of pelvic infections.

Although this is a rare condition, it can still occur and is another reason for bleeding during pregnancy. Instead of an embryo forming within the womb, clusters of abnormal tissue, known as a “mole” grow and take up the space. Bleeding, pain and a lack of foetal signs can all cause suspicion. An ultrasound can distinguish if a molar pregnancy is present. Occasionally women who’ve had a molar pregnancy require chemotherapy due to cancerous cells that have developed.

Occasionally an infection is responsible for pregnancy bleeding. Identifying the cause of the infection is important so that the appropriate treatment can be initiated. If a bacterial infection is present then treatment is given with an appropriately sensitive antibiotic. Depending on the extent of the bleeding, hospital admission may be necessary.

A UTI can cause bleeding during pregnancy, both from the womb and the bladder. Treatment with antibiotics is usually very effective, but it may be necessary to stay on these long-term. Untreated urinary tract infections can lead to premature labour and kidney damage.

Many women experience light vaginal bleeding after having intercourse. Most commonly, this is because the cervix is inflamed and engorged with blood. Most women are advised to stop having sex for as long as the bleeding continues.

This is a condition that occurs when the placenta lies over, or partially over, the cervix. Instead of the placenta adhering to the wall of the womb so there is a firm seal where the blood flows between the two, there is a leakage of blood. There are different degrees of placenta praevia, each measuring the extent to which the cervix is covered. If the coverage is complete, there is no way the baby can be born vaginally, so a caesarean section delivery is necessary.

Older women, having had a previous history, and multiple births, all raise the odds of having placenta praevia. Around 70% of women with placenta praevia have painless bleeding, 20% will experience some cramping with bleeding, and 10% have no symptoms.

This is an obstetric emergency and can threaten the life of the baby and the mother. In placental abruption, the placenta separates from the wall of the womb and causes bleeding and abdominal pain. In most cases, caesarean section delivery is necessary. Women who have had 4 or more children, who use cocaine or tobacco, who are aged 35 or older, who have a history of placental abruption or surgery to their uterus are more at risk. The odds of having placental abruption are around 1 in every 200 pregnancies.

Around 80% or women with placental abruption will experience heavy blood loss and clots from their vagina and 20% will not have any visible blood loss at all.

Having an antepartum (before childbirth) bleed can also occur when the baby is coming before its due date. Giving birth before the 38th week of pregnancy is classified as premature labour. Blood loss at this time may be more watery and tinged with mucous. This is because the membranes may have ruptured as well and the amniotic fluid is mixing with blood.

Can occur in the later stages of pregnancy and is more common in women who have had 4 or more children. Where the uterine wall has been weakened, because of previous surgery or a caesarean, it is more common for the uterus to separate. A uterine rupture is classified as an obstetric emergency so immediate transport to a hospital is critical.

Occasionally, varicose veins of the vagina or lesions on the cervix can cause bleeding during pregnancy. But this tends to be a rare occurrence. Women who have had vaginal trauma or varicosities to the extent where bleeding is possible, usually have some degree of forewarning.

This can be differentiated from the mother’s blood with a special test on the blood. Foetal cells, rather than maternal cells, are identified as being present in the mother’s vaginal blood.

When to get medical help

Any bleeding during pregnancy needs to be investigated. Although it can be more common for women to bleed during the first trimester, it is still important to seek the advice of a healthcare professional. Self-diagnosis is common, but it doesn’t help to establish the true reason for blood loss.

Ultrasound is a commonly used means of identifying why bleeding has happened. It can also help to work out where the bleeding has originated, if the baby is still viable and what to expect.

Some women don’t realise they are pregnant and find out they are when they present to their doctor because of vaginal bleeding. This is more common with women who have irregular periods and are not using contraception.

What you can expect to happen if you are bleeding during pregnancy:

It can be devastating for couples who are keen to have a baby to experience bleeding during pregnancy. Although many women go on to deliver perfectly healthy babies, there is no guarantee. Supportive counselling can be immensely useful for couples who experience grief and loss issues. 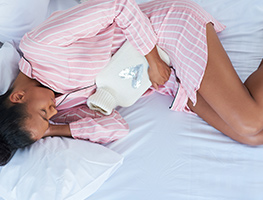