Symptoms of Anemia in Pregnancy to Look Out For

Anaemia can develop at any time throughout your life, but it is more common during pregnancy.

This is why routine testing is done at regular intervals during a woman’s pregnancy, in particular within the first trimester and at around 20 weeks.

Anaemia is essentially a decrease in the number of red blood cells, known as haemoglobin, in the blood. The bone marrow is responsible for constantly producing and replenishing these highly specialised cells every 120 days. Because they are responsible for carrying oxygen to all the cells of the body, two of the first signs of iron deficiency anaemia are breathlessness and tiredness.

Many women have low iron levels early in their pregnancy because of blood loss through their monthly periods. In fact, iron deficiency is common among young women who may not even be aware they have it, especially those who experience very heavy periods. Though during pregnancy, when there is a span of amenorrhoea (no periods), iron stores have a chance to replenish.

It is far easier to prevent anaemia from occurring in the first place than to treat it once it has been diagnosed. Even when dietary intake is sufficient, pregnant women can still become anaemic. This is why it is important to have every pregnancy monitored by a midwife, GP or obstetrician.

Anaemia occurs due to a variety of different reasons:

Chronic illness where there is already a compromise to normal blood levels and functioning. The three major causes of low iron levels in your body are due to blood loss, poor diet or the inability of your body to absorb iron.

Signs and symptoms of Anaemia

With treatment, a mother’s iron level should return to within a normal range in a few weeks. If this does not occur, then additional screening tests are ordered to rule out any underlying cause for her anaemia. Even after delivery, iron supplementation is often recommended to compensate for extra blood loss at the time of birth. Follow-up blood tests are commonly ordered at the 6 week post-natal check-up.

Note: Iron tablets can cause constipation, stomach upsets and a change in the colour of bowel motions so that they become a very dark green or even black. You may need to increase your intake of fibre and fluid or take a stool softening agent to manage this side effect.

But I’m scared of needles!

Unfortunately, the only way to diagnose iron deficiency is by testing your blood. Tell your doctor if you are anxious about your blood being drawn so they can take that into consideration by putting a gel pack on your arm beforehand, or letting a nurse do it who specialises in blood collection.

It is also a good idea to take a good friend with who can distract you or support you through this process. Make sure you drink plenty of fluid – it also makes blood collecting easier.

Will my Anaemia affect my baby?

Mild anaemia does not pose a risk to your baby, only to you as the mother. Babies are designed, by nature, to ensure they have adequate iron to grow and fuel their brain growth. This combined with the changes in your digestive processes can lead to iron deficiency anaemia even if your dietary intake is sufficient.

Babies store iron for the first few months of their life so that they do not have a deficit in their own needs. When solid food e.g. iron-fortified rice cereal, is introduced at around 6 months of age, this boosts their iron intake to fuel their body’s requirements.

It is uncommon for babies to be iron deficient at birth. In fact, the opposite is often true, which is why newborns frequently become jaundiced as result of adjusting their iron stores to a normal range after they are born. One of the by-products of red cell breakdown is bile, which can cause a temporary yellow staining of the skin and eyes. Babies need a high haemoglobin count to “grab” onto as much oxygen as they can, as it is coming via the placental blood flow.

Untreated anaemia can lead to premature delivery. Babies of anaemic mothers tend to be lighter than they would otherwise be. Because of these factors, there is an increase in other associated risks of prematurity and being small for gestational age.

If you are diagnosed with anaemia, don’t become alarmed. With treatment and regular monitoring, a return to normal iron levels almost always occurs. If your iron count is particularly low, you may need to make some lifestyle changes until it returns to normal. Modifying your working hours, having more rest and sleep, and focusing on having an excellent diet can make all the difference.

Things to Avoid During Pregnancy

Back Pain During Pregnancy 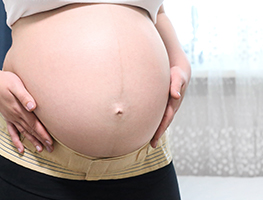